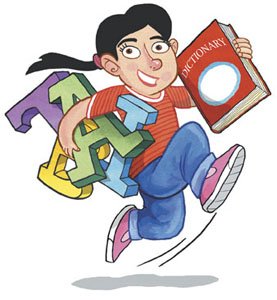 Since the publication of the “Lexical Approach” by Michael Lewis in 1993, Language teaching practices have been widely reviewed and discussed. So what are the features of the  Lexical Approach? Is it a revolution in the profession of language teaching or just an evolution? What are its claims?  How can it be implemented in the classroom?

The Chomsky’s notion of a native speaker’s output consisting of an infinite number of “creative” utterances is at best a half-truth. In fact prefabricated items represent a significant portion of a native speaker’s spoken and written output. Native speakers have a vast stock of these lexical prefabricated items or chunks and are vital for fluent production. Fluency does not depend so much on having a set of generative grammar rules and a separate stock of words as on having rapid access to a stock of lexical chunks. It would seem, then, that speakers need both a prefabricated, automated element to draw on as well as a creative, generative one.

Once the importance of prefabricated language is acknowledged, The grammar/vocabulary dichotomy becomes obviously false. In fact, language has long been analyzed as consisting of grammatical structures and a set of usually single vocabulary items. Grammar has been given priority over vocabulary. The latter has been seen as secondary in importance, merely serving to illustrate the meaning and scope of the grammar. In the lexical Approach this dichotomy is irrealistic and considered to be based on false assumptions about language. Language is basically its lexicon. The key principle of a lexical approach is that “language consists of grammaticalized lexis, not lexicalized grammar.” In other words, lexis is central in creating meaning, grammar plays a secondary role in managing meaning. When this principle is accepted, the logical implication for teachers is that we should spend more time helping learners develop their stock of phrases, and less time on grammatical structures.

Nature of the lexis

There is a distinction between vocabulary, traditionally thought to be constituted of single items, and lexis, which includes not only the single words but also the word combinations that we store in our mental lexicons. Lexical approach advocates argue that language consists of meaningful chunks that, when combined, produce continuous coherent text, and only a minority of spoken sentences are entirely novel creations. Michael Lewis present this taxonomy of Lexical items:

The Lexical Approach pays attention not only to single words but more importantly to collocations and institutionalized utterances and sentence frames. Michael Lewis states that

“instead of words, we consciously try to think of collocations, and to present these in expressions. Rather than trying to break things into ever smaller pieces, there is a conscious effort to see things in larger, more holistic, ways” (1997a, p. 204).

A collocation is the readily observable phenomenon whereby certain words co-occur in natural text with greater than random frequency and is not determined by logic or frequency, but is arbitrary, decided only by linguistic convention. Some collocations are fully fixed, such as:

Other Collocations are more or less fixed and can be completed in a relatively small number of ways, as in the following examples:

Lexis in the classroom

Central to the lexical approach is the focus on teaching real English and a shift away from the artificial language found in ELT textbook and which is drawn from the intuition of textbook designers. In fact, the approach contends that the language course books teach is “not what people really say.”  That is why it is urgent to avoid distorting the language with course book writer intuition and access the authentic language via corpora (a large amount of written and sometimes spoken material collected to show the state of a language). Intuition often fails to accurately reflect the real use of language. Corpora, however, can instantly provide us with the relative frequencies, collocations, and prevalent grammatical patterns of the lexis in question across a range of genres. In addition, light is shed on lexical variation. This leads to the collection of thousands of vocabulary items that cannot be taught in the traditional PPP (Present-Practice-Produce) framework. So how does the Lexical Approach deal with the teaching part? Even if the approach doesn’t present a clear theory of learning there are some  hints about how the teaching looks like within the approach.

The Lexical approach is not really a revolution but an evolution as it tries to develop principles already known by communicative language teachers. The aim of ELT is still the teaching of communicative abilities by focusing on successful language rather than accurate language. The originality of the approach lies in its claims about the nature of language. The distinction between grammar and vocabulary has become less valid and a more realistic view about language, based on the supremacy of lexis over grammar is advocated. The challenge that the approach is facing is how to convince teachers to change their mindset in favor of this new vision about language.